Freshen Up Your Course with Memes

Internet memes – you have seen them before on Twitter, Facebook and Instagram. They communicate short, typically funny, messages with cultural reference and are extremely popular in social media. Memes often contain visuals, many are accompanied by text and to an extent, contain sound. Recognizable Internet memes gain their popularity online as they are passed around among social media users.

Memes are so effective that they became a tool in marketing and even political campaigns. They enable conversations – or more specifically jokes – between large organizations openly in the Twittersphere, engaging their followers like never before. (See Marvel vs IGN GIF-off and Formula 1 teams Mercedes vs Lotus-Renault) They can also draw controversy, like the one involved in recent presidential primaries spat between two GOP front runners. In any case, memes are Internet-approved, tried and tested tools for communication. 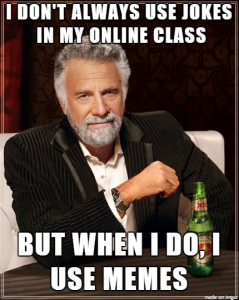 Memes in Your Online Course

What better way to add some humor and increase student engagement than integrating memes in your online course. They are easy to make and grab attention, plus your students are already familiar with them. Using memes in the classroom is hardly a new idea, but one that is underutilized. Memes have been used to spice up content as well as student assignments to encourage creativity and can serve as critical thinking exercises.

Here are some ideas and examples:

If you teach Economics you are in luck. There is a website dedicated to using memes to teach and learn Economics.

Higher Order Thinking through Memes Building – This article discusses how memes can be effectively used as critical thinking exercises for students.

All of the websites below allow you to create memes by either selecting from an existing one or uploading your own image. You have an option to download your creation.

New to memes? Review The Complete Guide to Internet Memes, then head to Know Your Meme: Internet Meme Database and click on a meme to learn more about its cultural reference and appropriate usage context.

Give memes a try and see how you like it!