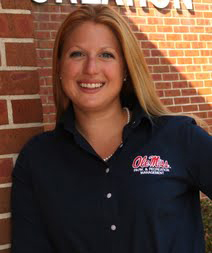 The 2012 Paragon Award for Excellence in Distance Teaching was awarded to Anna Pechenik Mausolf from Health, Exercise Science and Recreation Management.

Her graduate mentor was Dr. Kim Beason, a fellow online instructor, who encouraged her to take part in Web Enhanced Instructor Training. Anna taught her first hybrid course, PRM 371 Camp Leadership, in 2011. She went on to teach the same course fully online for the first time in Spring 2012. This was the course for which she received The Paragon Award nomination. Anna is known for using technology to bring her students together as a class.

When Anna was notified she had been nominated for and won The Paragon Award, she asked if it was April 1st. Not only did Ms. Pechenik receive the Paragon Award in 2012 she also just received an award for top graduate student in the country by her national professional agency (The National Recreation and Park Association). Read the full story.